It has been said that an important element in the development of the industrial revolution was the invention of the company limited by shares. Prior to that point if a person invested in a business which failed, their assets could be seized to pay off any deficiency. From that time on the liability of the investors was limited to the amount they had invested in the shares of the company. This allowed companies to raise capital on a large scale for the first time.

A company limited by shares is a separate legal entity, governed by company law, and owned by its investors or members in proportion to the shares they hold. The company is run by a board of directors who are answerable to the members and can be removed by them in an Annual General Meeting. In Ireland there must still be a minimum of two directors. The shareholders receive dividends from the profits of the company, and, especially if the company is a public one, may hope that the value of their shares increases over time.

Each company has its own governing document, called the Memorandum and Articles of Association, which are usually based on a standard set with minor adjustments. This document must set out the proposed activities of the company in the “objects clause”. Any activity which the company carries out which is not stated in its objects clause is “ultra vires” or outside its powers and therefore illegal, and hence there are pages and pages of objects in the standard document (the current companies bill is proposing to change all this).

The vast majority of companies in Ireland are small private entities, often family owned.  The issues which often arise tend to relate to a conflict between members as to the salary levels of people running the business, the valuation of shares where someone wants to sell up, or general business policies, and can have their basis in family relationship difficulties. In the event of insolvency, the liquidator cannot pursue the assets of the shareholders, although in practice the Bank has usually insisted on personal guarantees.

There are legal obligations imposed by company legislation upon directors, but a shareholder can have no further obligation over and above the amounts invested, except for any call due on shares not fully paid.

As with companies limited by shares, these are separate legal entities, the main difference being that the liability of the members, or subscribers, is limited to an amount they have guaranteed to contribute in the event of insolvency, usually a nominal amount such as €1 each. The company must have at least seven subscribers, and there is no share capital.

These companies are very common in Ireland, because the Revenue expect any new charity company to be limited by guarantee, so they are invariably charities. The Revenue have standard company Memorandum and Articles of Association and in practice people tend to just change the ‘principal objects’ clause.  They are non-profit organisations.

Most companies limited by guarantee are not set up for the purpose of making profits and, not having a share capital, they lack any ready mechanism for the distribution of profits among the members. Many such companies include in their memorandum a clause prohibiting the distribution of profits or capital, and this will be essential if the company wishes to be regarded by the Revenue as being incorporated for charitable purposes.

The accounts prepared for companies limited by guarantee must be audited (it is proposed that this will change in the next couple of years).

Directors cannot receive remuneration, and no dividends can be distributed, but staff can be paid.

When the company ceases to act, any surplus of assets cannot be distributed, but must be given to a similar charitable organisation.

The Revenue maintains a list of companies which have been given charitable exemption from taxation. There is a standard form for applying for such exemption; when considering such an application the Revenue will usually consider who is involved in the company, the arrangements for corporate governance, decision-making, etc.  Unlike the rules in England, charitable activities can relate to foreign countries, perhaps from the long Irish tradition of foreign missions.

When a company has been on the primary list of such companies for two years, it can apply to be put on a second list of charities for which donations attract tax credits.

AS with the company limited by shares there is no legal obligation on the members, other than to subscribe the promised contribution of €1 in the event of insolvency. 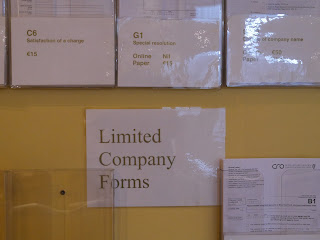 
*For disclosure the supplier referred at www.companyservice.ie is owned by Nolan & Associates.
Posted by Unknown at 14:54